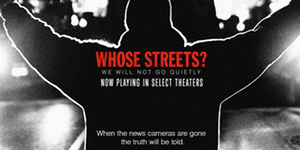 A nonfiction account of the Ferguson uprising told by the people who lived it, Whose Streets? is an unflinching look at how the killing of 18-year-old Michael Brown inspired a community to fight back—and sparked a global movement. Learn more: http://www.whosestreets.com/

After the screening, a discussion will be led by local racial justice advocates (Speakers to be announced soon!)
$5-15 suggested donation