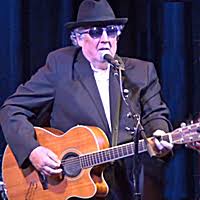 Kevin’s musical career begin in his home town of Belfast, Ireland, where during the 1960’s he played in a band with Van Morrison called The Great Eight. In the 70’s he toured extensively in Europe and Ireland. In 1978 he made the Bay Area his new home and formed his own band called Claddagh, playing the SF Club scene for years. He teamed up with
Van Morrison again, performing and opening his shows throughout the 80’s. Kevin has played at many notable venues with Van and the legendary Irish band The Chieftains.

Kevin’s solo performances are wide ranging from traditional Irish folk and contemporary ballads to American folk, country and blues. Song and story telling comes naturally to Kevin, who has a deep pool of songs, stories and yarns that he loves to share with his audience.

Kevin currently devotes his talents to paying tribute to his old friend and world-class performer Van Morrison. He is supported by a group of top caliber musicians who really enjoy what they do.