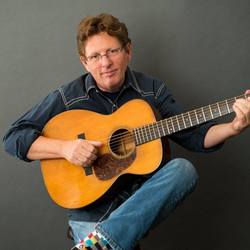 (Doors open at 7:15) In Tim O’Brien’s music, things come together. The uncanny intersection of traditional and contemporary elements in his songwriting, his tireless dedication to a vast and still-expanding array of instruments, and his ongoing commitment to place himself in as many unique and challenging musical scenarios as possible has made him a key figure in today’s thriving roots music scene – and well beyond it. O’Brien’s presence – be it as a bandleader, songwriter, mentor, instrumentalist, or vocalist – has been strongly felt not only in his own rich music, but in the many recordings of his songs by such artists as the Dixie Chicks, Garth Brooks, Dierks Bentley, Nickel Creek, Kathy Mattea, the New Grass Revival, and the Seldom Scene, and in his recorded collaborations with Steve Martin, the Chieftains, and innumerable others. Most recently, O’Brien has been performing before capacity crowds in the band of Mark Knopfler, who described O’Brien as “a master of American folk music, Irish music, Scottish music – it doesn’t matter; a fine songwriter and one of my favorite singers.”