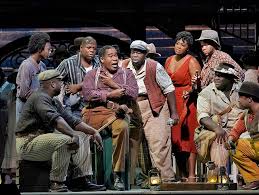 Pre-screening Lecture, on Gershwin’s Porgy and Bess, by Alexander Kahn (Everyone is Welcome!)

Note: complimentary tickets to Gershwin’s Porgy and Bess at the Rialto Cinemas in Sebastopol will be drawn and offered to patrons attending the pre-screening lecture!

Contact Rosalie Abbott or Mathew Rose at the Sebastopol Library for more information.

Alexander comes to Sonoma State from Gettysburg College, where he was Associate Professor of Music and Director of Orchestral Activities at the Sunderman Conservatory of Music. Previous university-level orchestras with whom Alexander has worked include the UC Berkeley Chamber Orchestra (Founder and Music Director) and the UC Berkeley Symphony (Assistant Conductor).

In addition to his position at Sonoma State University, Alexander has worked with professional orchestras across the United States and throughout Europe. He is the Founder and Music Director of the Metta Ensemble, a professional chamber orchestra based in Gettysburg, PA. He has also served as Cover Conductor for the Baltimore Symphony and as a Staff Conductor for the Spoleto Festival in Charleston, SC. Recent guest conducting engagements have included the HUB Opera Ensemble, the Pazardzhik Symphony Orchestra in Bulgaria, the Latoshinsky Orchestra in Kiev, Ukraine, and the Salzburg Soloists of Salzburg, Austria. Between 2007 and 2008, Alexander served as Assistant Conductor of the Bamberg Symphony in Bamberg, Germany. While in Bamberg he was also Music Director of the Bamberg Collegium Musicum and Guest Conductor of the Bamberg Universität Orchester.

Alexander earned a PhD in Music History from UC Berkeley and remains active as a scholar. His dissertation entitled “Double Lives: Exile Composers in Los Angeles” focused on the community of European exiles who fled to Los Angeles during the Third Reich. He has lectured and published on this topic and other issues related to World-War II-era music history and has also published on a variety of topics including film music and the history of amateur music-making in America.

Alexander’s love of music was inherited from his father, Eugene Kahn, a conductor and educator on Long Island. His primary conducting studies were at UC Berkeley with David Milnes and at the Peabody Institute with Marin Alsop, Gustav Meier and Markand Thakar. He has also participated in workshops with teachers including Larry Rachleff, Kenneth Kiesler, Daniel Lewis, and Peter Gülke.

When not conducting, Alexander enjoys cooking, hiking, reading, and traveling, and spending time with his wonderful wife and daughter.