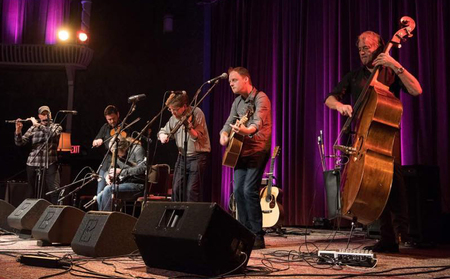 Most recently Tim O’Brien has been performing before capacity crowds in the band of Mark Knopfler, who described O’Brien as “a master of American folk music, Irish music, Scottish music — it doesn’t matter: a fine songwriter and one of my favorite singers.”

Lúnasa is internationally acknowledged as being the finest traditional Irish instrumental outfit of recent times. They are renowned for their stunning shows and the superb musicianship of the members. The group has sold more than quarter of a million albums in the course of the band’s career and boast an impressive catalogue of seven highly acclaimed and award-winning studio albums.

Now celebrating their 20th anniversary, Lúnasa and the remarkable Tim O’Brien embark on a transatlantic musical journey exploring the common roots, interplay and mutual influences at the heart of American and Irish music.