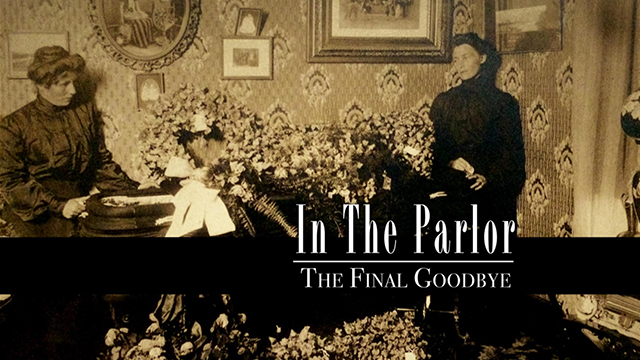 Final Passages continues its monthly Film and Discussion Evening called Let’s Talk About Death with a Special Benefit screening of In the Parlor; The Final Goodbye, a documentary film examining the growing trend of families caring for their loved ones after death.

Rejecting the mainstream tradition of hiring funeral professionals to care for the deceased, families in search of a more personal and fulfilling way to say goodbye are taking an active role in caring for relatives who have died.

In The Parlor shares an intimate story of three individuals who with the support and guidance of their families and communities were cared for after their deaths, at home. Julie, Ron and Jarrad, all unique individuals with very different circumstances are portrayed in a thoughtful, quiet manner to give the viewer an idea of what”family directed death care” might look like. ITP is not about assisted suicide, Hospice or palliative care, but what takes place after an individual has died.

Interviews with both funeral industry professionals and DIY advocates, open the possibility of questioning mainstream options that are increasingly expensive and bad for the environment.

Both a critical look at the American relationship with death and an inquiry into the home death care movement, In The Parlor: The Final Goodbye takes viewers on a journey where very few have gone, and challenges us to reflect on this uncomfortable subject, which so often is hidden away and ignored.

Doors open at 6:00PM
Come early to get your seat and enjoy home-made savory foods and desserts for sale at the event!