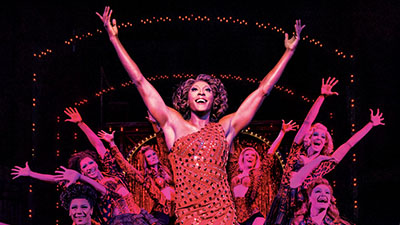 Winner of every major Best Musical award on Broadway and in the West End, Kinky Boots is the hottest show in town!

This huge-hearted hit tells the story of two people with nothing in common – or so they think. Charlie (played by Olivier® Award nominee Killian Donnelly) is a factory owner struggling to save his family business, and Lola (played by Matt Henry, who won an Olivier® Award for the role) is a fabulous entertainer with a wildly exciting idea. With a little compassion and a lot of understanding, this unexpected pair learn to embrace their differences and create a line of sturdy stilettos unlike any the world has ever seen! But in the end, their most sensational achievement is their friendship.

Taking you from the factory floor to the glamorous catwalks of Milan, Kinky Boots’ beloved status in the West End was consolidated in its Best New Musical victory at the 2016 Olivier® Awards ceremony, proving that sometimes the best way to fit in… is to stand out!