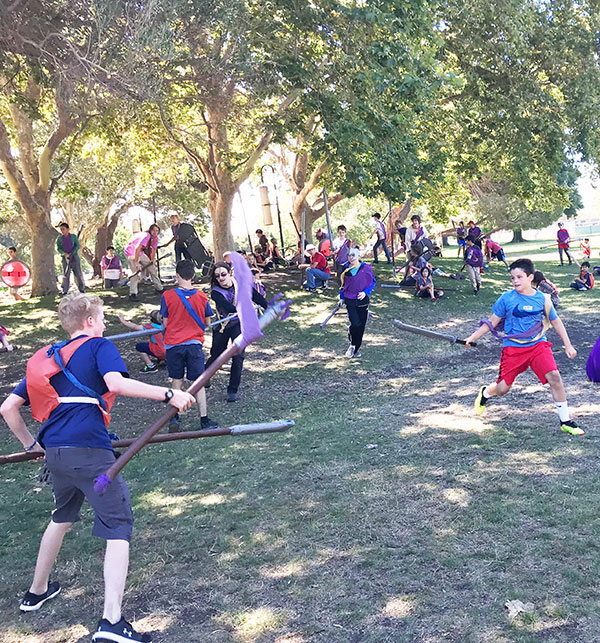 Live Action Role Playing (LARP) is a combination of sports, drama, and table-top role playing games. In LARP, players pretend to be someone else, living in a different time or place, and acting out events that might happen in that world. Many of these games involve “battles,” and so LARPers use safe, padded props that look like weapons to act out the combat. Unlike in a play where everyone has certain lines to say and the story is set, in LARP, the players each act out a certain person and make their own decisions for that person as the game evolves.

Safety strategies are in place for all players.
Due to the physical nature of the activity, minimum age is 9 years old.

10-1pm – Battle League open to all levels of play. Lots of great combat, adventures, and minimal plot. The place to be to get skilled at the game and get into some massive quests.

2pm-5pm – Quest League. This League is designed for beginners who want to try out playing a simple character and getting into some quests. The missions and setting are designed to be easy to jump into without any prior knowledge and the storyline is full of lots of battles, dungeons, and comic scenarios. Come enjoy some LARP with friends in a simple setting with minimal rules.

This workshop provides an outside-of-school activity that is social, physical, and mentally challenging in a time when kids more and more are finding sedentary, electronic alternatives to real human interactions. Both sessions involve players making and role playing as characters in a shared imaginary world that spans the Bay Area and has hundreds of players continuously involved in collaborating on the process of storytelling and adventure.

Live Action Role Playing has many forms and settings all over the world, and has been a popular pastime for kids and adults for generations. Every child who plays at pretend has done LARP, although they didn’t know they were doing it. We are not the creators of LARP, but rather, those keeping the tradition of imaginative play alive in our culture.